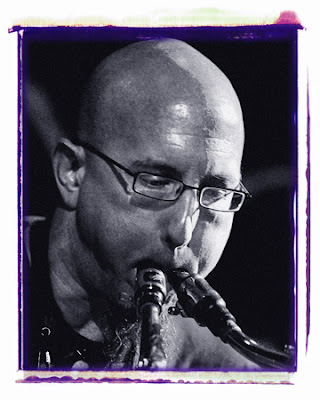 My bad! I didn't get a photo up again. Here is a photo for yesterday, and I will upload today later with some extras.


This is Jeff Coffin. He is master of the reed instruments. Jeff is a member of the Flecktones, and also has another project The Mu'tet.


Jeff was onboard Jamcruise as a part of the core members of the Everyone Orchestra with Jon Fishman, Steve Kimock, Matt Butler and Jamie Janover. Jeff ended up playing a massive part of the Jamcruise jamming. Aside from his sets with the EO, he lead a sax clinic with Dominic Lalli, Karl Denson and Skerik, played with Soulive, Yonder Mountain String Band, The Superjam, Col. Bruce Hampton's Massive Jam Room session and I am sure that I am leaving out some other performances. Look out for some Mu'tet dates and a few special nights with drummer Jeff Sipe performing as a duo.
Posted by Brad Hodge Photography at 12:49 AM