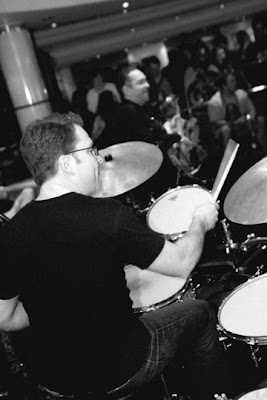 Here is another photo from Jamcruise 6. The first night on board, the guiding light Col. Bruce Hampton was set to lead a session in the Jam room. He brought with him a cast of A-listers like Grant Green Jr., George Porter Jr., Stanton Moore, Robert Walter, Karl Denson and Jeff Coffin. They were all joined later by Warren Haynes and I think at one point or another Steve Kimock and Eric Krasno. The bar was raised so high by that jam that the room felt empty when the last note rang out. All of the energy had been used up, and no one wanted to follow what had just happened. Later the same morning I caught up with Col. for some breakfast and conversation. He agreed that it was an amazing late night of music. In fact he said it may have been his most enjoyable night of making music. Topping playing on the same stage as Zappa and Clapton in the 70's. That is heavy!
Posted by Brad Hodge Photography at 6:01 PM