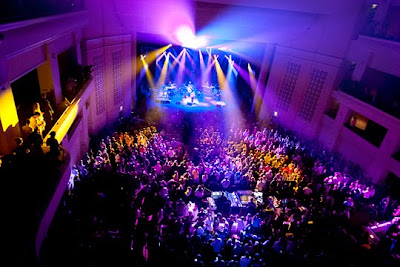 This past week was a tough one. A great friend's dog was hit by a car and went to be with Woo, and we all know a dog is as good as any man. The blessings of life and love are so fragile and can be ripped away from us in an instance. Life's biggest lover, and a dear friend Brian Lauer also was taken from us. Sometimes a person with that much love to give and laughter to share gets promoted from an earthly ambassador to something much larger than life. He now has the burden of watching over all us and making sure we make it to the show (something he will be so good at. He's been practicing for years).

After his funeral some good friends took the torch and headed for Athens to partake in one of Brian's favorite past times cheering on Widespread Panic. The band was celebrating their 25th Anniversary with two shows where it all began. The Classic Center was built on the spot where the band played their first gig, and is a place they have played some highly coveted shows. These two nights would be no different. The first night the band started the show with the Buffalo Springfield cover "For What its Worth" a song they had not played since 88. Then followed with two personal favorites "Sleepy Monkey" and "Chilly Water." Those three songs were how the band started that first show way back in 1986.

Friday night in Athens was exactly what it needed to be. My friend Gabe celebrated his birthday, everyone I saw wore a huge smile, and Brian's presence was everywhere. After two monstrous sets filled with gems like "No Sugar", "Machine> Barstools", "Nights in White Satin", "Impossible" and " New Speedway Boogie" the first encore could not have been started with anything more fitting than " Don't Be Denied."
Here is a shot that hopefully shows what kind of party it was. Looks exactly how I pictured the band would say farewell to a friend and eternally loving fan. We take you with us everywhere Brian, and we will never be able to show all the love you had, but we will put our best foot forward and know you will still pick up the rest-
Posted by Brad Hodge Photography at 10:26 PM

I am so sorry for your losses. But thankful for your additional guardian angels.

Just caught up on some of your older posts. Appreciate the shoutout here and spending my birthday with you all was exactly what the doctor ordered after such a tough week. We'll miss you round these parts, buit I am sure CO will be good to you. GOD BLESS BRIAN LAUER!